How to quell Carbon Monoxide Poisoning

Unfortunately we have read and seen news reports of those who have died as a result of carbon monoxide poisoning and most recent events included three people in a motor home.

More fortunate was a couple in a caravan in Victoria. It was early in the morning when the husband awoke to a strange odour, and when he went to wake his wife who was also an asthmatic, he found he couldn’t. He managed to get her out of the van and seek help. Fortunately she survived.

So, what is carbon monoxide? Carbon Monoxide or CO, is an odourless, colourless gas that can cause sudden illness and death. It is found in combustion fumes, such as those produced by cars and trucks, small gasoline engines, stoves, lanterns, burning charcoal and wood, and gas ranges and heating systems. CO from these sources can build up in enclosed or semi-enclosed spaces. People and animals in these spaces can be poisoned by breathing it.

The most common symptoms of carbon monoxide poisoning are headache, dizziness, weakness, nausea, vomiting, chest pain, and confusion. High levels of CO inhalation can cause loss of consciousness and death. Unless suspected, CO poisoning can be difficult to diagnose because the symptoms mimic other illnesses. People who are sleeping or intoxicated can die from CO poisoning before ever experiencing symptoms.

Do not use portable flameless chemical heaters (catalytic) indoors. Although these heaters don’t have a flame, they burn gas and can cause CO to build up inside your home, cabin, caravan, motor home or camper. If you smell an odour from your gas refrigerator’s cooling unit have an expert service it. An odour from the cooling unit of your gas refrigerator can mean you have a defect in the cooling unit. It could also be giving off CO. When purchasing gas equipment, buy only equipment carrying the seal of a national testing agency, such as the CSA Group.

So, how can you avoid this problem while caravanning or even in your own home? While I have been aware for a long time of smoke alarms, I admit I was not aware that a unique carbon monoxide detector was available at a very reasonable cost.

Quell, a division of Chubb Fire & Security, manufacture this great digital carbon monoxide alarm which is very easily set up in your caravan, motor home and in your home. Quell also have a dual smoke and carbon monoxide alarm, so, if you haven’t installed a smoke alarm as yet, serious consideration should also be given to this one. 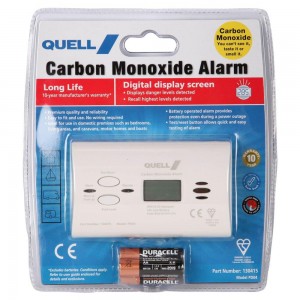 Recently, I was telling a couple of caravan friends about these great life saving alarms, and they asked where it should be mounted in either a van or at home. Quell’s ‘User Guide’ recommends the following for installation:-

Quell carbon monoxide detectors are available at a very moderate cost from most leading hardware retail outlets. They also come with a 10-years warranty, are very easy to install and use and no wiring is needed.

If you would like more information on the Quell carbon monoxide or smoke detectors visit their web site at www.quell.com.au

Get The Latest From Camper Deals